Dare To Be Stupid: My 1985 Seattle Seahawks Story 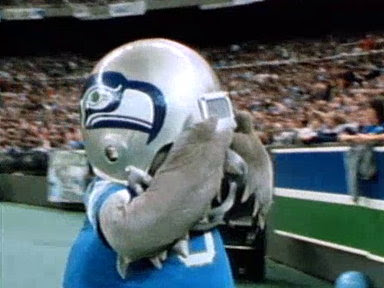 Younger Twelves won't remember this, but 2013 isn't the first time the Seattle Seahawks have gone into a season as Super Bowl favorites. In 1985, the Hawks were a trendy AFC pick to go to (and win) Super Bowl XX in New Orleans. Why? The team was coming off two straight playoff appearances, including a trip to the AFC Championship Game in 1983 and a 12-4 1984 campaign that included a playoff win over the defending Super Bowl Champion Raiders. Seattle arguably had the league's best defense in '84 (anchored by DPOY Kenny Easley), and they racked up a dozen regular season victories AFTER losing rookie sensation Curt Warner to a blown ACL on Kickoff Weekend. With the offense forced to rely more on the passing game, Dave Krieg responded with 32 touchdown passes and his first Pro Bowl selection. Yeah, they blew their chance at HFA by dropping their last two regular season games, but it was hard to be TOO upset at the '84s when they fell to the Dolphins at the apex of Dan Marino's career year.

The equation was simple: That 1984 Seahawks roster + a healthy Curt Warner = A Seattle football juggernaut. Not only did Playboy Magazine pick the Seahawks to win the Super Bowl, the team VOLUNTARILY made this in the months before the 1985 season:


That''s how things were done back in the 1980s, kids. Think you might be a championship team? Well, then you had to make an ABYSMAL music video. It was the style of the times, and so forth.

Obviously, the '85s fell far short of those stratospheric expectations. This is they story of how it all went wrong, and how a maddening, lost season unfortunately dovetailed with a rough time in my life to teach me some harsh lessons about stupid reality.

In 1985, I was 10 years old. I was going into the 5th grade, and I had two main obsessions: The Seattle Seahawks and "Weird Al" Yankovic. Back then, my wardrobe was centered upon two things- Either a Seahawks jersey or a Hawaiian shirt. That summer, the first record I bought with my own money (and yup, in '85 it was still vinyl) was Weird Al's third album: Dare To Be Stupid. I listened to that damn record NON-STOP for months, particularly the title track...


So there's the evidence for y'all- I was a HUGE fucking dork. I didn't have many friends, so I was particularly dependent upon the Seahawks to buttress my incredibly shaky self-esteem. After John Elway's breakout 1984 season, Broncos fans suddenly were popping up all over the Tri-Cities, and it felt like ALL of them were attending my elementary school. In my 10-year-old mind, the Hawks had to defend my honor, or it was going to be an intolerable year at Jason Lee Elementary for me.

That summer my family also moved out of the only house I had ever known, into a much smaller duplex on the same block. I didn't really comprehend the financial problems my family was having- All I knew was that it sucked that all seven of us were now crammed into a much smaller house. Even more than usual, Seahawks Sundays became moments of escapism. I still vividly recall watching the season opener at Cincinnati with my father at the duplex. My Mom and my sisters weren't around that day, so it was just my Dad and me. Seattle led 21-10 at halftime, only to fall behind in the 4th quarter- but a late Curt Warner TD sealed a 28-24 comeback win for the Hawks. Dad and I hugged and jumped and spun around... In a childhood largely barren of good memories of my father, that counted as a highlight.

The Hawks won another road game in Week 2 at San Diego. Dave Krieg and Dan Fouts got into a classic 80s shootout, with Fouts torching Seattle for 440 yards and four TDs. Mudbone might have "only" thrown for 307 yards that day, but five of his completions were TDs. Steve Largent had one of those scores, but Daryl Turner got the other four to pace Seattle to a 49-35 win at Jack Murphy Stadium.

(Fun Daryl Turner fact: While he only caught 34 passes in 1985, THIRTEEN of them went for touchdowns, and he averaged a ridiculous 19.7 yards per reception.)

After that, the '85s settled into their most aggravating pattern. For the entire season, they alternated two-game winning streaks with two-game losing streaks. My most crystal clear memories from 1985 are the heartbreaking losses... in OT at Denver... a late blown lead in NY against the Jets... by a TD at home against the eventual AFC Champion Patriots, and the perfect defeat to send us into the offseason with a hangover: a home loss to Denver where Seattle blew a 17-0 lead. If you'd like to torture yourself, here's the whole bloody affair.

So what happened? Mainly, the team just regressed to the mean. They went from a +24 turnover ratio in 1984 to a +3 ratio in '85. The offense dipped from 5th in football in '84 to 13th in '85, mainly because Warner didn't immediately bounce back from his ACL injury like he was Adrian Peterson (and it didn't help that Dave Krieg's passer rating dipped by seven points either). There were memorable individual efforts, though. Steve Largent had the best statistical season of his career, and was chosen to the All-Pro team. He also made this sick-ass catch:

On the defensive side, Jacob Green sacked enemy QBs 13.5 times and scored this incredibly entertaining touchdown... Damn! He could MOVE for a big guy.

The 1985 Seahawks represented my first truly bitter disappointment as a sports fan. After each loss, the dread I felt about going to school on Monday ratcheted up. Sunday nights after losses became intolerable dirges where I would sit awake in my bed imagining the crap I would get in class the next day. My only consolation was that the Broncos ALSO missed the playoffs in '85 despite finishing the campaign with an 11-5 record. If you want to know why I still hate John Elway, the roots are largely in 1985. That season was when the torment imposed upon me by Mr. Ed and his acolytes took on a pattern that would continue until I escaped to college. That horse-faced ass damn near ruined my childhood single-handedly.

But I survived 1985. I kept wearing my Seahawks jerseys and my Hawaiian shirts. I survived being a Weird Al-loving nerd (and I still love that curly-headed fuck... he's still cranking out hit records, by the way). I survived that year living in the duplex. I would survive not having a decent, healthy relationship with my father. I would survive a hundred other crises to get where I am today, both as a person and as a Seahawks fan: On the verge of cataclysmic change, on the edge of triumph that will change everything forever.

Hell ya! Love this article, great job! You are on a tear lately with the articles, keep it up!

Great trip down memory lane. I was eight years old in 1985 and it was the first year I was truly able to understand and follow the games. My dad was a season-ticket holder, and the hawks were the hottest ticket in town. I remember going to a Mariners game at the kingdome in August, and they were playing the Seahawks' preseason game against the Colts on the Jumbotron the entire time!

I had a similar experience with the disappointing and frustrating 2004 Seahawks.

I had been thinking about the 1985 pre-season hype for a while now this off-season, as the Seahawks finally seem to have turned the corner. It's a great cautionary tale--I was 12 and learned that the Seahawks would not always be improving, as I assumed from their early history. The same thing happened to many of us in 2006, after XL when we thought they'd revive with a vengeance. I cannot take any season for granted, now, even 2013, but I appreciate your optimism.

I loved Enberg/Olson as an announcing tandem.