You all saw the game. It sucked. Hasselbeck's injury was embarrassing. Whitehurst was incompetent. The Seattle defense was shredded. It's obvious that the Seahawks are not a very good team right now.

But you've been here all season... Don't tell me that you're going to turn your back NOW... Not when we are SO CLOSE to giving a huge fuck-you to our divisional rivals and millions of haters and/or perpetrators... You can't hold on for one more fucking week? Yes, the last couple of months have been a grim slog through a sewer knee-high in shitty, piss-poor football... But don't underestimate how orgasmically cathartic a SINGLE WIN next week would be. Yeah, we'd be a 7-9 playoff team, and that will bring howls of derision from the Guardians of NFL Propriety... But why should we give a fuck about THEM?

Like Tyler Durden said once, we are the all-dancing, all-singing crap of the world. No one outside of South Alaska likes us, or wants us to win this game. This game has already been described on Twitter as a "showcase for Sam Bradford and Steven Jackson." Mike Sando of ESPN is basically openly rooting for the Rams, talking about how a STL win would "save face for the NFC West." Are you going to line up with these enemies of the Twelve Army and whine all week about NOT WANTING TO WIN? Fuck that!

The game has been flexed to Sunday Night on NBC- How awesome is that? How can you not be excited about that? We have an opportunity to go out there and kill the season of a divisional rival on national television... If that doesn't get you jacked up, what will? This is the first "win-and-in" Seahawks final Sunday home game in 27 years- Even at 6-9, that's a BIG DEAL.

Then there's the personal drama- One of the following things happens next Sunday night:

A) Charlie Whitehurst starts at QB for the Seahawks, in what is probably his last chance to get Pete Carroll to consider him as a long-term starting QB option in Seattle. Does he step up and change the trajectory of his career, or fade quietly into football oblivion? It would be life or death for his NFL career.

B) Matt Hasselbeck, after a week without taking a single snap in practice, starts for the Seahawks. With free agency looming, can he come off the bench and win a division title in perhaps his final regular season game with Seattle? Can he add another glorious chapter to his Seahawks legend?

Personally, I'd rather go into battle with a cold, banged-up Hasselbeck than Whitehurst with a full week of reps- I'd be shocked if he isn't able to talk Carroll into letting him start on Sunday. Frankly, I'd rather die with him than with Charlie. Yes, I would follow Beck into the dark.

I say we can do it. All of the weak-willed, and all the cynics can fall away- all I need are 53 players and 64,000 maniacs ready to WIN, and the Seahawks will prevail.

More as the week rolls on towards the NFC West Championship Game, of course. What do you think, sirs?
Posted by Ramona P. at 10:03 PM

I am having a difficult time not blowing up over at field gulls. All of the self defeatists who are too afraid to win. They yell at you that you are calling out their fandom, but really you are just pointing out that they are afraid to root for their own team.

Yeah, getting a bit toxic over there these days :( God forbid we WIN this week.

Holy crap. I loved reading that. I say destroy them and shock everyone, including myself, by winning our home playoff game. Ha! 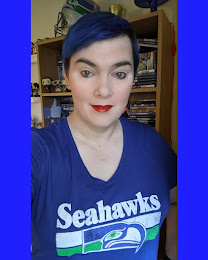