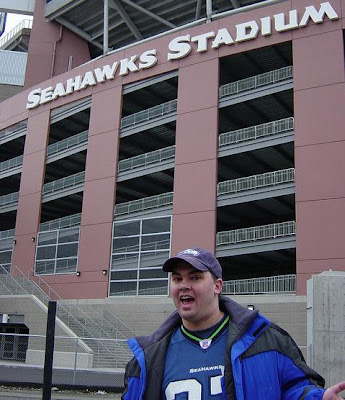 There I am at the home venue of the Seattle Seahawks, back in 2002.

In the grand scheme of things, getting all lathered up over corporate names slapped onto sports arenas is a fairly big waste of energy. Hell, even Fenway Park and Wrigley Field's names are rooted in promoting some corporate/business interest. However, what does piss me off is the frequency with which stadium names CHANGE in this corporate-labeling regime. Now it's happening to the Twelve Army.

Is this some horrible injustice? No, not even close. But it is an opportunity for Twelves (and our Sounders FC-rooting soccer brethren) to stand up and say with one voice: "Enough! Just because some company gobbled up another company, it doesn't mean I have to call my team's venue something different!"

Let's be honest: Qwest Field was a crappy moniker too. Yes, since the Seahawks had great success while the stadium had that name, we grew attached to calling it that. But it was flawed itself- The cutesy corporate misspelling of the word quest... The use of the word "field" in the name of an NFL venue. Ugh. I hate that. Save that for baseball venues- In the NFL, they are STADIUMS or COLISEUMS. Field? Just not menacing at all.

So from now on, I'm calling it Seahawks Stadium. From 2002-2004, that was the arena's official name, so there is some history there. It also is short, sweet, direct, and accurate. It is the stadium where the Seahawks play. If you were going to name such a building, what would be your first choice? See? Boom. Roasted(and you Sounders FC folks can call it Sounders Stadium on the same principle).

If I was going to propose a more neutral name? Puget Sound Stadium, or as a nod to the official name of the Kingdome: King County Stadium. But I prefer Seahawks Stadium.

There's a great set of T-shirts pushed by the Uni Watch blog that promotes the "I'm Calling it ______" idea. Go here and send Paul Lukas an email on the link at the bottom of the page. Tell him you'd buy a "I'm Calling it Seahawks Stadium" shirt (I would), and gently urge him to stop slagging on our team's beautiful uniforms.

Come on, your argument with respect to Field vs. Stadium is fallacious. The most iconic names in the NFL both use field. Soldier Field and Lambeau Field. Though I whole heartedly hated the change from a neutral name to a Corporate name (that happened to include field).

Iconic or not, I HATE the term "field" being used in the name of an NFL venue. It's my opinion, and not really an "argument" per say. Also, fuck the Bears and Packers. Just because they have done something forever, doesn't make it the way things should be done.

Hoping it'll eventually be named after Paul Allen (like Lambeau or Paul Brown Stadium). If that happens then I won't, necessarily, mind having it be called CenturyLink for a few years.

I'm all for that- after Mr. Allen shuffles off this mortal coil, which hopefully won't be for decades.

Vulcan Coliseum would be my choice if we had to have a corporate name. It honors Allen since its his company plus its the Roman god of volcanoes and fire, fits with the area and is badass. Additionally, it has symmetry as Vulcan and gladitorial coliseums are roman concepts

"An ancient god of fire in Roman mythology, Vulcan is the counterpart of the Greek god Hephaestus, the god of fire and patron of metalwork and crafts."

That would be cool. But it should be spelled "Vulcan Colosseum." That is the original Latin spelling of coliseum.

What would be great would be a stylized reflection of Mt. Rainier on the south/southwest portion of the stadium. It would be corny, but kinda cool if they were to show video of Mt. St. Helens erupting as the Hawks are introduced.

The Seahawks could play with this idea.

I like the idea of just accepting the new name and using nickname "The Clink."