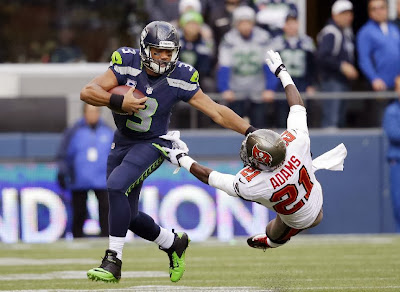 What do you call a team that allows a winless opponent to take the ball away three times, beat the living shit out of their invaluable franchise quarterback, and rack up 350 yards of offense with rookies starting at QB and RB?

It certainly helped that Seattle was up against one of the NFL's most pathetic, dysfunctional squads yesterday. Tampa Bay is a forlorn crew "led" by noted arrogant dipshit bully Greg Schiano, who has inexplicably held onto his job despite utterly destroying a franchise that was consistently competitive before his arrival. Schiano rules through paranoia and fear, and the contrast with Seattle's Pete Carroll couldn't be more stark. Greg The Woodchopper has the Stench of Singletary all over him, and the cocktail of his inept leadership, Tampa's utter lack of hope, and Seattle's clear advantages (better talent, home field, etc) pointed to a blowout Seahawks win.

The first half was like a visit to the mythical land of Rand McNally (People wear hats on their feet! Hamburgers eat people! Double '90s Simpsons reference post!). It was OUR quarterback throwing inexcusable red zone interceptions. It was OUR defense defense getting shredded by a 3rd-round former N.C. State quarterback. It was OUR special teams barfing up turnovers deep in our own territory. We were behind 21-0, and it would take the biggest comeback in franchise history (yes, even bigger than this one) to stay one step ahead of the Niners and Saints.

Thankfully, this team has mounted multiple furious comebacks from huge 2nd-half deficits, just in the last 10 months. When we fell behind by three touchdowns, my first thought wasn't "Oh shit! We're gonna lose!" It was "How the HELL are they gonna MacGyver up a win today? This'll be something new." The defense never quite seemed to solve The Intricate Riddle Of Mike James, but they started making stops. The offense never quite figured out how to protect Russell Wilson, but Marshawn's 1st-half tummyache faded, RW3 still made plays, and Angry Doug Baldwin honored the 1983 Seahawks in attendance by making a handful of key receptions, including his best toe-dragging Largent impression.

Golden Tate? He just gave us his seemingly weekly "No! What the fuck, Golden? Wait... Yes! Yes! Fuck yeah!" moment with an electrifying 71-yard punt return to set up a key 4th quarter field goal. Even Wilson's second mind-meltingly Whitehurstian red zone interception couldn't derail the Seattle comeback train. DangerRuss's 3rd touchdown of the day (2 by air, one by land, this one to DB Fresh) tied the game, and the defense made two final stops (side note: Earl Thomas III was once again the standout performer for Seattle's defense, and is making a strong case for NFL Defensive Player of the Year honors). On the game's final drive, Darren Bevell wisely chose to Feed The Beast, and Lynch responded with runs of 10, 19 and 13 yards to set up Steven Hauschka's game-winning boot. Schiano and his charges shuffled off the field, dejected and defeated, as it should have been from the beginning.

So what next for the Seahawks? It'll be fashionable to predict defeat at the Georgia Dome next week, even though the Hawks will be facing a 2-6 Falcons team in an obvious death spiral. Fashionable, but dead wrong. With memories of last January's soul-shredding playoff defeat in Atlanta still vivid, I expect Seattle to grind out a convincing win next Sunday.

Then it'll be just the vanquished Vikings and a bye week standing between the Hawks and that MNF showdown with the Saints (and then the rematch with the Niners). By that crucial six-day stretch in early December, the Seahawks SHOULD be at full-strength personnel-wise. They should also be 10-1 and confident in the knowledge that they can surmount almost any challenge they face between those white lines. These gut-churning narrow wins are no fun for us fans, but they may prove to be psychologically crucial in Seattle reaching its ultimate goal: Victory in Super Bowl XLVIII.

I'll take an ugly win everyday over a pretty loss.

Side note, every time Russell Wilson gets three touchdowns, all I can think of is: One if by land. Two if by Sea-ttle.

I have no idea why I always think that.

I was at this game. The crowd went from surprised to bewildered to angry to defiantly hopeful to excited to elated to relieved. The usual loud, boisterous exit down the ramps to the street was replaced by, "Damn, what did we just witness?!"

And let's not look "past" next week's game either. The Falcons may be 2-6, but their 13-3 record last year was not by accident or luck.