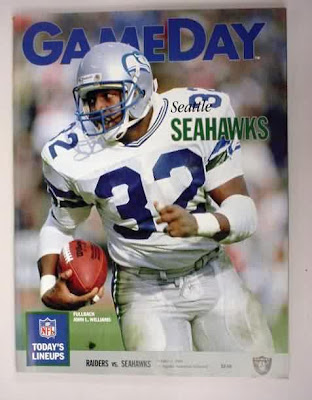 First of all, if you want to read a great, detailed account of the 1988 season, go buy Fighting Chance by Fred Moody. Used copies are literally 75 cents on amazon...

This was the first Seahawks team to win a division title, and they had to scratch, bite, claw and gouge their way to the top of the AFC West. The Largent/Harden saga was a great metaphor for the entire '88 campaign... Here's the visuals from youtube:

In an opening day loss at Denver, Harden laid out #80 with a dirty hit that busted Largent's facemask (and luckily not his brainpan). Largent saw the perfect opportunity for revenge during the Kingdome rematch and took it... That was the '88 Hawks: They took a lot of shots, they endured a ton of abuse, and at times looked nowhere near playoff-worthy... But they will be forever remembered fondly by the fans who witnessed their struggles, and by the division championship banner that hangs in Qwest Field.

Seattle needed a victory against the Raiders in L.A. on the season's final Sunday to win the West, and they prevailed in a thrilling 43-37 shootout. The highlight? John L. William's 75-yard touchdown dash that put Seattle up 37-20 (play is at 3:00 mark of this clip)...

In the divisional playoff at Cincinnati, the Hawks fell behind 21-0, and Chuck Knox infamously had Joe Nash repeatedly fake injuries to slow down Sam Wyche's no-huddle offense. Seattle staged a furious 4th quarter rally, which was thwarted by a bobbled snap on a PAT try by holder Steve Largent (?!??).

If you'd like to learn more, consult your local library... or just go buy Moody's book, you cheapskate.
Posted by Ramona P. at 9:05 PM