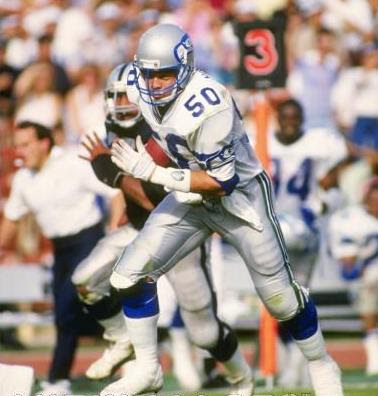 The '87s are one of the most memorable teams in Seahawks history. On one hand, they are infamous for the Boz and that awful MNF beatdown administered by Bo Jax and the Raiders. Despite that, the Hawks pulled things together and notched one of the most amazing regular season wins in team history. In Chicago, against the mighty Bears, the Hawks were supposed to be mere foils in the great Walter Payton's final regular season home game... But we spoiled those plans like John McClane at Nakatomi Plaza, y'all, and clinched a playoff berth.

If the Hawks could have just beaten the lowly Chiefs in the season's final game, they would have hosted the Oilers in the AFC Wild Card game instead of traveling to the Astrodome. On top of a 41-20 loss, we lost Pro Bowl RB Curt Warner for the playoffs.

In that Wild Card game, the Hawks were severely outplayed for about 58 minutes. After a missed Houston FG gave the Hawks the ball down by seven in the waning moments, Dave Krieg led an amazing TD drive that included a 4th and 10 conversion, a long bomb to Ray Butler and the tying score on a lazer-beam strike to Largent. This was probably the single greatest performance of #80's career: 7 catches for 132 yards and both Seattle touchdowns. Largent had more impressive statistical performances, but none on a bigger stage, and none with the team's main offensive weapon (Warner) sidelined.

In OT, All-Pro linebacker Fredd Young picked off a deflected Warren Moon pass deep in Oilers territory. Unfortunately, the INT was waved off and declared incomplete despite clear visual evidence that the ball never touched the astroturf.

Little did we know that was the Genesis of two decades of the
Hawks getting royally screwed by NFL officials... Ugh. Dave Krieg would throw a much less controversial pick later in OT, and that was that.

The '87s are largely a "what-if" story. What if there hadn't been a players strike that ripped the guts out of the middle of the season? The unpleasant truth is that the Hawks edged Miami out of a playoff spot based on a win in a "scab" game. What if we had won that game at Arrowhead? What if Warner hadn't gotten hurt? What if I hadn't gotten one of those retarded Boz haircuts? and so on...