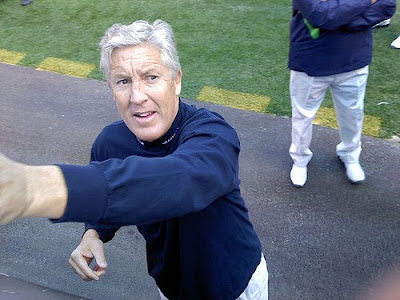 A brief set of pictures from the game

Aside from the horrible, boring, shitty loss I had a great time at the game- Let's get the ugliness out of the way first...

Charlie Whitehurst is getting hammered from all angles right now, so I really don't want to pile on- He stepped up last year against the Rams and got us a divisional title. He will always be able to say he was instrumental in putting that banner in the Seahawks Stadium rafters... But the simple truth is that he should never be given the opportunity to start another NFL game. He was THAT bad yesterday. I typically bemoan the types of fans who pin losses completely on a single player, but make no mistake: If Whitehurst delivers anything better than one of the worst QB performances in franchise history, the Seahawks would be 3-3 today.

Aside from his abysmal stat line, Whitehurst consistently failed to throw to open receivers, failed to hit wide open receivers with passes they could convert into points (from the stands I noticed Sidney Rice's frustrated reactions over and over), and repeatedly held onto the ball too long. Whitehurst was set up to succeed yesterday against a mediocre Cleveland team, but he was unfocused and timid. He simply is not an NFL starting quarterback. Tarvaris Jackson may not be a GREAT starting QB, but he has shown that he can lead an NFL team. Whitehurst has not, and he should only be allowed on the field from here on if the Seahawks have NO other options. Yes, I mean that if Jackson can't go, I'd rather see what we have in Josh Portis. CW is gone after this year, and maybe gone from the NFL. I love PCJS, but trading a 3rd for Whitehurst is probably their worst personnel misstep so far.

Besides the disheartening season-ending injury to Walter Thurmond, the other big story (again) was terrible officiating. This time the main offender was noted attention whore Mike Carey, who threw a befuddling roughing the passer flag on a Seattle sack of Colt McCoy, and erased a Leon Washington touchdown with one of the most ticky-tack block-in-the-back calls of all time. Apparently even Jim Mora was ranting about how terrible that call was on the Fox NFL broadcast.

You also made me look like a total dipwad, Mike Carey- During Leon's punt return I lost my GOD DAMN MIND. I was jumping and screaming like I was on fire, celebrating what looked like Seattle's winning touchdown- Then all the fucksticks around me got the satisfaction of pointing out the laundry on the field. Thanks, asshole.

Good stuff? The defense was spectacular- I can't fault them for allowing nothing but two 53-yard field goals, and they are creating an identity as a hard-hitting, extremely violent crew. Thurmond's injury is terrible news, but not necessarily crippling for this young, developing defense. Special teams also deserve recognition for two blocked field goals, Washington's nullified TD, and for keeping Joshua Cribbs in check all day.

It also turned out that sitting in the No Alcohol/Family Section was a BRILLIANT move. There were lots of empty seats, and lots of little kids around. As long as I didn't curse, I was golden. The strategy was vindicated after Washington's TD got called back, when a dude yelled at me "If we weren't in the family section I'd kick your ass." Well, yeah... but here we are, moron.

I should take a second to be a snob about the in-stadium experience. It didn't come anywhere close to the exciting atmosphere we have at Seahawks Stadium. Stuff like raising the 12th Man Flag or fireworks during the introductions may seem cheesy to some folks, but it makes a HUGE difference in creating a fun experience for fans. They do exactly JACK SHIT in Cleveland. The attitude seems to be: "here's a football game: take it or leave it, schmucks."

The stadium was probably about 80% full, and the only times any real efforts were made to make noise to impede the Seahawks offense were on 3rd downs... Even then, it was like soothing white noise compared to the 747-taking-off wall of decibels at Seahawks Stadium. We are VERY lucky to have the amazing in-game atmosphere and home-field advantage the Seahawks enjoy in Seattle.

The Awesome stuff? I got to weasel my way down to the Seahawks tunnel, and the Hawks seemed way more interested in coming over and talking to us fans in Cleveland than they seem to be back at home games. I don't blame them- I want them focused and ready for battle... but it really seemed to excite them to see so many Seahawks fans come out to support them. I got to shake hands with and monosyllabic-ally talk at Sidney Rice and Pete Carroll, but the COOLEST moment was when Earl Thomas noticed I was wearing his jersey. His eyes lit up, he ran over and gave me an ENTHUSIASTIC handshake (almost to the point of hurting me). I was just overwhelmed by the experience. Seriously, if you are a Seahawks fan, find a way to get down to the tunnel during warm-ups... It can be mind-blowing.

I hesitate to talk about this, because it seems so masturbatory and self-congratulating, but I was extremely humbled to meet so many fans of this blog at the game. There was the couple from Toronto that I hung out with for a good 45 minutes before the gates opened, the fellow Twelve who hooked me up with Sunday Ticket last season, the husband of the woman I ran into at the Toledo Zoo on Friday, and a few others (I'm hesitant to name names, because I don't know if these people want the extra exposure). My apologies to the nice lady who was yelling at me from across the Seahawks tunnel before the game- It took me forever to realize she was talking to me, and then even longer to realize she was a fan of the blog. I must have looked like a complete idiot... Sorry! Your support means a lot to me, everyone. I'd do this even if no one was reading, but knowing that there are people out there who enjoy reading my thoughts about the Seahawks is deeply satisfying and encouraging.

Don't despair about the loss, Twelves. We are only one game in the loss column out of the last NFC Wild Card slot, and once T-Jack is healthy I truly believe we can start going on a tear through our schedule. This team is still on an upward trajectory, despite yesterday's craptacular shit-fest.

What do you think, sirs? Does anyone else who was at the game have a tale to tell?
Posted by Ramona P. at 10:09 AM

Hey man, my brother and I really enjoyed meeting you up in your seat right before kickoff. I too felt like an ass after losing my shit as Leon (seemingly), waltzed for the game winner...

What a joke that officiating was as a whole. As the Browns fan sitting next to me pointed out, "notice how they didn't show a replay on that roughing the passer call on your DB? That's because they will NEVER show a borderline call on the Jumbo Tron."

The city of Cleveland was awesome. The fans are just downright stupid though. I have been to many away Hawks games and understand that all teams have their fair share of drunken jackasses but there seemed an inordinate amount rooting for a terrible Browns team.

Oh well. Hey I'm glad no one gave you too much crap in your seat. My brother and I were watching you from the next section over, ready to come to your defense if need be. :)

Nice to meet you, I'm sure it won't be the last time.

Geoff,
It was great to meet you guys too! I'm sorry you had to deal with more jackasses than I had to in the family section- Having all those little kids around was like that scene in Raiders of the Lost Ark where the children burst into the cantina and saved Indy from the French twat and all the Nazis :)

JP,
Sure CW wasn't very good Sunday but stating he should never start another game is an overreaction (and one many, besides you, are making). You have to remember we were missing four critical starters including center Unger. That was huge. His receivers did him no favors either. Drops by McCoy and Obo were killers. And if we didn't screwed on the punt return TD, then there would be less slamming of Beef Supreme and more talk of the awesome D.

These are Hasselbeck's first three games ever as a starter with Jones & Hutch on the line and Alexander and Strong in backfield. Beef Supreme has only had three starts and at least one of his was a win (and without the benefit of a great line or star RB.

My point is that it's too early to judge CW. We gotta have patience with these young Hawks.

MTT,
I read Sando's article too, but I aint buying. CW is a free agent after this year- Do you really think there is any chance he has a future in Seattle? I don't. Yes, he will play this week if T-Jack can't go- But that's the only scenario where he should be allowed onto the field. He has no future beyond this season with the Seahawks, and perhaps no future in the NFL.

Hawkblogger was analyzing one play, early in the game. Sure, CW missed a number of throws but there is this overreaction, just like there was after the Pitt game with Tavaris. Neither Beef Supreme (love that name, btw) nor T-Jack are Hass (and Hass wasn't even Hass the last few years). I still think three starts is too early to determine whether he has an NFL future. Like I pointed out, Hass had a very rough start but he turned out alright. And CW, like Matty Hass, comes from NFL stock.

BTW, I didn't read Sando's article so I don't know what you are not buying. A Kelly Stouffer jersey perhaps?

Sando's article was making the exact same "give Charlie time, it's too soon to tell" argument. I grant that we may have to put CW back out there if T-Jack isn't ready to go, and in that case I hope he plays great- But he has no chance of winning the starting job anymore, and I can't see the scenario where he is wearing a Seahawks uniform in 2012.

I believe he's on a two-year contract so you are most likely correct if he doesn't play a helluva better. They might be making room for that kid from Prosser.

Keep it up man! Your blog style is all your own, but I enjoy reading your purely emotional connection. It is a big differentiation for your blog, and it is always clear you are speaking from the heart. You can't ignore someone who shares as openly as you. Thanks for the content!