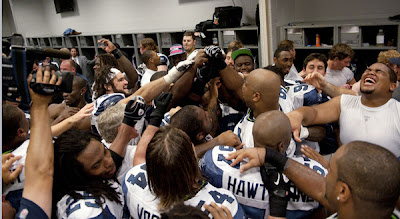 I spend too much time writing rough drafts of blog posts in my head, and even though I publicly picked the Seahawks to win this week, I spent a lot of time mentally composing what I'd write if Seattle lost at the New Meadowlands.

"At 1-4, the Seahawks playoff hopes appear to be dead- But that doesn't mean that we can't salvage value out of the final 11 games of the season. 8-8 is still an important and reachable goal- It would be great to avoid a 4th consecutive losing season, and show measurable progress from 2010 (even if that progress doesn't include another trip to the playoffs). I still think this season feels a lot more like 2002 than 1992- The beginnings of a glorious ascent, rather than a spirit-shredding lost season."

Fuck all that, obviously...

With a stunning 36-25 victory, the Seahawks overcame the 10 A.M. East Coast Thing and defeated the Giants in New Jersey for the first time since 1983 (a crucial win for THAT season's playoff hopes as well). They overcame a hostile crowd, a talented NFC East opponent, and multiple key injuries. The winning touchdown drive was led by a much-maligned back-up Quarterback who THREW that winning TD to an undrafted free agent who is making a strong case to be the NFC Offensive Rookie of the Year.

More than all that, Seattle overcame DECADES of "Same old Seahawks" mental conditioning- How many Seahawks teams have played well on the road in a first half, only to squander multiple opportunities to put a vulnerable foe away, and wilt in a 2nd half? How many times have we seen a miracle play like that Victor Cruz TD catch early in the 4th break the will of previous Seahawks teams? I am sure MILLIONS of Seahawks fans thought at that point: "Well, game over- Guess the football gods just hate us."

We found out today that when it comes to the "football gods," these Seahawks are Richard Dawkins-level Atheists. They are playing football unbound to expectations, unchained from history. Pete Carroll has torn down the crumbling edifice that was rotting when he arrived, and now we can start to see what he is building in its place: Something beautiful and fearsome- Something designed to endure and excel.

Nothing the Giants threw at the Hawks broke their fighting spirit, and that is the BIGGEST culture shift we've seen since Carroll's arrival. T-Jack gets injured? Whitehurst wobbles, but eventually leads the team to victory (but no, he shouldn't start unless Jackson is unable to play due to injury). Eli Manning throws for 420 yards? The defense neutralizes that by forcing him into FOUR turnovers. Marshawn Lynch fumbles in the red zone? He bounces back with a TD and 98 yards on only 12 carries. We are seeing this team take developmental LEAPS every week, and it's a delirious joy to behold.

At 2-3, the Seahawks are where I thought they would need to be back in August to still have a shot at the playoffs going into their bye week. Surprisingly, they have a better shot at an NFC Wild Card spot than an NFC West title (at the moment, at least). In two weeks they should emerge as a healthier group, and now one with the growing confidence that comes with battle-tested success. I wouldn't want to be ANY of the teams playing Seattle after the bye, because we might just be on the verge of marauding through a meaty chunk of our upcoming schedule.

Your Seahawks aren't just "rebuilding," my fellow Twelves- Right now, TODAY, they are a dangerous team learning how to be lethal. Enjoy this, my friends. Enjoy it.

UPDATE- Forgot about this one... Anthony Carvalho posted this on his twitter account- A photo from a Sports Book in Las Vegas: 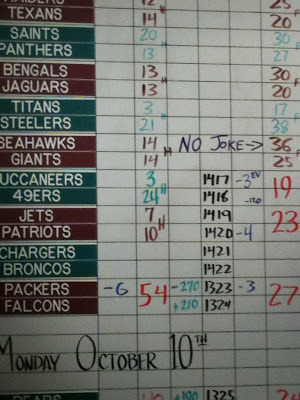 I say we OWN this- EMBRACE this! These Seahawks are, indeed, NO JOKE. Spread that word, Twelves!
Posted by Ramona P. at 7:33 PM

Awesome win, still Pete Carroll-esque jacked up after the win. Going to enjoy wearing my hawks gear all week here in California.

JP,
You gotta love a HUGE win like this leading us into the bye week. We get two weeks to bask in this victory before you make your pilgrimage to the New Mistake-by-the-Lake.

I am all for embracing the NO JOKE call.