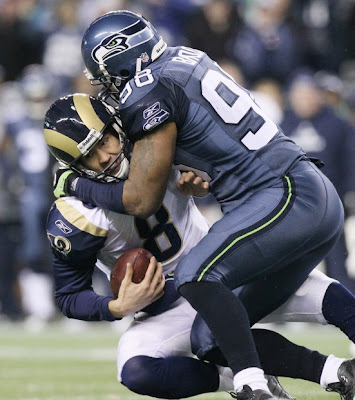 Want to know why I still intensely hate the Rams, even though we've beaten them 11 out of the last 12 times we've played them? Go read my account of the 2004 season if you're fuzzy on your history in this rivalry....

Back? Awesome! Today I thought we'd take a look back at our 10 most glorious victories over those Midwestern jokers- I'll be honest and admit this is kinda like a clip show, since I did this as a Top 5 over on Field Gulls last year... But it's still over 50% new material- Enjoy!

10. 12/22/91 Seahawks 23, Rams 9
This game is notable because A) it was our only win EVER over the Los Angeles Rams and B) it was the final game in the Seattle careers of Chuck Knox and Dave Krieg. Yup. After the final whistle that day 20 years ago, we entered a decade of torment and desperation.

James R. Jones scored two touchdowns for us that day, and the ONLY reason I know that is from looking it up on Pro Football Reference 5 seconds ago.

9. 9/13/09 Seahawks 28, Rams 0
The first day of the Jim Mora era, and also its high point. I got to meet John Carlson's parents before the game, and Julius Jones inexplicably ran for 117 yards. Never have the high hopes created by an opening day win been later proven so VERY false. Ugh. At least I took a LOT of pictures that day...

Hmmm... That's about all I remember about that game.

7. 11/27/07 Seahawks 24 @ Rams 19
This one makes the list mostly because I was at the game... It was a triple barf-bucket kind of day that left me slumped in exhaustion after Gus Freotte’s fumble on 4th and Goal from the 1-yard line FINALLY sealed a Seattle victory in the waning seconds. The Seahawks showed mental toughness clawing back to win after falling behind 19-7, but otherwise this wasn't a glorious highlight of the 2007 campaign.

The experience of watching a game at St. Louis' Dome was pleasant, but a bit boring. The fans rarely did more than clap politely, and the arena itself had the atmosphere of a comfortable, brand new Costco Warehouse rather than an NFL stadium. The stadium was only about 75% full, and most of those folks left with over 5 minutes left in the game. On the plus side, no one gave my brother, my step-dad, or I any crap the whole day, and more than one person congratulated me on the Seahawks’ win after the final gun.

6. 11/12/06 Seahawks 24, Rams 22
The Rams could have tied Seattle for the division lead at 5-4 with a win in this one, and midway through the 4th things looked bleak. The Seahawks hadn't scored since before halftime, were trailing 16-14 and playing like Night of the Living Dead-type zombies. After Nate Burleson's electrifying 90 yard punt return, the Hawks took the lead and started playing like 28 Days Later-type zombies... Rage Virus! Grrrrr!

I was at Seahawks Stadium that day, and the Twelve Army erupted like a mob of fucking Uruk-Hai after Burleson scored. Still, the Rams scored later to retake the lead, and Seneca Wallace had to lead us into position for the winning score... Spoiler alert: Since it was 2006, the game ended with Josh Brown nailing a field goal for a Seahawks win.

5. 9/21/03 Seahawks 24, Rams 23
Early in the 2003 season, Seattle was itching to prove they were a true playoff contender, and the mighty Rams visited what was still OFFICIALLY called Seahawks Stadium. The Hawks were behind 23-10 as the final quarter began, but then sprung to life like Uma Thurman getting a shot of adrenaline and stole a dramatic 24-23 win with a Hass-to-KRob TD in the final seconds.

We happened to be hosting an "end of summer" yard sale that day, and I'm pretty sure I scared business off with the various otherworldly shrieks I emitted throughout the afternoon.

4. 11/13/05 Seahawks 31, Rams 16
Shaun Alexander ran wild in the cold November rain and the Rams were rightly fustigated. But for me, just seeing the game involved some serious drama. In the academic racket, you gotta go where the jobs are, and a lot of those jobs are in places you don't really want to be. Coming out of grad school, beggars can't be choosy though. You're lucky to get INTERVIEWS, let alone jobs, so you jump at any potential offer of gainful employment. I snagged an interview at a school in the "Witness Protection" region of Nebraska, and while my pregnant wife wasn't very psyched about the idea, it beat not having a job. One big problem: they wanted me to fly in on a Sunday. During football season. Fuck.

I'm not a complete peanuthead... I wasn't about to turn down the interview. But there was no goddamn way I was going to miss a Seahawks game, particularly one against the Rams. I made sure that I booked the earliest flight possible on Sunday. I pored over NFL TV coverage maps on The 506. I called the TV station in the town I was headed for to make SURE they would be airing the Seahawks game. I got a couple of my friends to text me updates on my cell phone until I got in front of a TV, and I packed my Hasselbeck jersey.

When we got to the hotel, I told my handlers that I needed to "unwind after that flight." They told me to meet them in the lobby at 6 pm local time for dinner, so I turned the game on just as the Hawks snuffed STL's harebrained fake FG attempt. I paced around that room for two hours, enduring a late comeback spasm by the Rams and nervously watching the clock... Imagine a guy in a shirt and tie, dress pants, dress shoes, with a Hasselbeck jersey on top of that... My plan was to strip off the jersey and head to dinner as soon as victory was assured, and jusssst in time SA galloped for six to lock down the win.

In a VERY good mood, I might have had one beer too many at dinner that night... and the next day during the interview, I probably blew it when I described my classroom style as "talk show host." The happy ending is that I'm not exiled to the forbidden zone of Nebraska, furthest from the bright center of the galaxy... and that the Seahawks won.

3. 10/09/05 Seahawks 37 @ Rams 31
After the psyche-crushing 2004 season, breaking the Rams' psychological dominance was the first real order of business the following year. In the Mike Martz's final game as the smuggest, smarmiest coach in NFL history, the Hawks ran out to a 34-21 lead. Up 37-31 late, the Hawks had to punt to Shawn McDonald (who delivered the killing stroke in OT at Qwest the previous October). Deliciously, Big Play Babs forced McDonald to fumble, and JP Darche recovered. Martz's coaching career ended, and the Rams' mental edge over the Hawks dulled into a useless butterknife of futility.

2. 10/15/06 Seahawks 30 @ Rams 28
At the time, I was stuck in a very remote corner of Ohio doing a 1-year teaching gig. The nearest outpost of modern civilization, a Target store, was 30 minutes away. This game is my single happiest memory of that year that doesn't involve my wife or son... It was one of the most exciting finishes in Seahawks history; The Hawks fought back from a 21-7 halftime deficit to take a late 27-21 lead. After a Mo Morris fumble deep in STL territory, Torry Holt made a ridiculous TD catch that looked like the death blow. Down by a point, Hasselbeck marched the Hawks into Rams territory. An illegal procedure flag was misinterpreted by Scott Linehan as a foul that included a 10-second, game-ending clock runoff. The jabbering dipstick was wrong, and left slack-jawed after Josh Brown nailed the 54-yard game winner at the final gun.

1. 1/2/11 Seahawks 16, Rams 6
It was fashionable for the national media to crap on this game between a 7-8 and 6-9 teams that would decide the NFC West title. It was damn near conventional wisdom among Seahawks "fans" that the team would be better off losing the game and getting a higher draft pick than going to the playoffs only to get bludgeoned to death by a superior team.

53 players, their coaches and 67,000 screaming Twelves didn't give a FUCK about any of that shit. Charlie Whitehurst etched his name into Seahawks history by leading Seattle to a win over the prematurely anointed Rams- He hit Ruvell Martin for a huge gain on the opening drive, which he closed by connecting with Mike Williams for what would ultimately be the deciding touchdown. As I wrote back then...

CW got a huge assist from Seattle's maligned offensive line and defense- The O-line largely kept Whitehurst clean, and FINALLY generated some push for Lynch, Forsett, and Washington. Defensively, the Hawks crashed The Sam Bradford Coronation Party, spiked the punch, smashed the ice sculptures, and ate all the bacon-wrapped shrimp. Steven Jackson was held to 45 yards rushing, and the only points STL could muster were two field goals by The Traitor Josh Brown.

You could argue that this game by itself was fairly unremarkable- But it WAS the Seahawks first victory in a "win and in" situation since 1988, and it set the stage for this:

What do you think, sirs? Did I miss any awesome memories of whomping on the Rams?
Posted by Ramona P. at 11:24 AM

JP,
That game in 2002 was also my first experience at Seahawks stadium. In fact, it was the first time I'd seen the Rams in Seattle since that negative yardage debacle in 1979. I have some pretty good memories of that '02 game. Hawks were in the middle of their late season 3-game winning streak. Hass threw for over 300 yards. K-Rob had a couple of sick catches and D-Jack had nice 38-yd TD reception right in front of me.

BTW, the game in 1991 was not only Knox and Krieg's last games as Seahawks but another Ring of Honor member as well: Jacob Green.

Good catch on Jacob Green! Feel lame that I forgot about that- I loved Jacob Green.