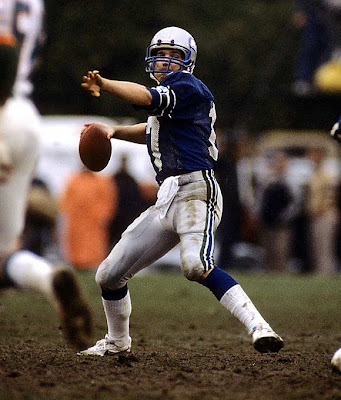 First, as they'd say in Galaxy Quest: The historical documents..

I've always loved that one of the greatest moments in Seahawks history got the John Facenda treatment by NFL Films, by the way (mere months before "The Voice of God" passed away).

1983 was the season that hooked me on the Seattle Seahawks for life. I saw Curt Warner gallop for 60 yards on his first NFL carry. I fell in love with a QB named Dave Krieg when he led a valiant but futile comeback against the Steelers and won the starting job. I saw the Hawks win an insane 51-48 OT game against the Chiefs. I went to my first game at the Kingdome, which ended up being a tussle with the Patriots for a spot in the playoffs. I yelled myself hoarse, got to see Largent score, and hung around for the famous post-game "curtain call" by the team after the game.

I was eight years old. I didn't really understand that the Seahawks were supposed to lose that playoff game in Miami. I had no real comprehension of the magnitude of that upset (The Fins were defending AFC Champs, and would be AFC Champs again a year later.. Behind rookie phenom Dan Marino, they were 17-point favorites over Seattle). But I still felt unbridled, boundless joy as I watched the team carry Chuck Knox off the field in triumph. Everything was possible. The Super Bowl was within reach.

It wasn't going to be that easy, of course. Those L.A. Bastards were simply a better team, despite the regular-season sweep the Raiders suffered at Seattle's hands. After that game I cried like Mom had taken away my Intellivision console, but that lifetime bond was sealed.

After living in Ohio for four years, my family moved to Seattle. I had two older sisters, and several family friends living there. One was VERY excited about the new NFL team.
We settled in Kirkland. I voted on the new NFL team name, and watched the team on and off for the next few years.
In 1983, I was mad that Mike McCormick brought in Chuck Knox. Didn't McCormick prove he was a better coach then Jack Patera? For some reason I was excited about the upcoming season. I went to my first Hawks game, the previously mentioned KC game.(Talk about emontionally draining, but there was nothing higher than walking out of the Dome after that win.) I've been hooked ever since then.
I lived in Alaska and New York before returning to Washington. I've taken alot of crap for being a Hawks fan (For some reason Bills fans can't figure out why a man named Jim Kelly wouldn't like their team.), but I've never waivered in my allegiance. The scrappiness, respect, intestinal fortitude, and dedication that the '83 team showed was magical. I started ninth grade that year. I was an adult (in my own eyes), but I didn't have adult responsibilities. It was the best of both worlds, and I was in heaven.
I started playing football that year. I wanted #80, but every wide receiver at Issaquah wanted #80. I got 83. I've only worn another number when 83 wasn't available, I even wore it in baseball. It's become a part of me. '83 was a great year, I started to become a man, I learned many lessons that I hold dear to this day, but that Seahawks team will always be my favorite.