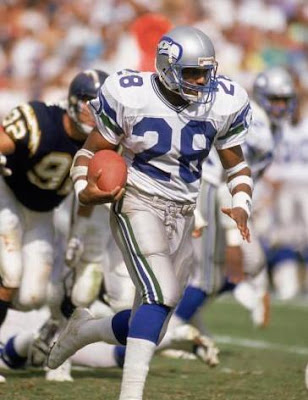 
If you're wondering how a non-playoff squad can make the top 5, you're probably too young to remember the exhilarating conclusion to the 1986 season... First the set-up:

The Hawks exploded out of the gate, starting out 4-1 and pulling off one of the great comebacks in team history at Foxboro. Down 31-21 late, the Hawks scored 17 points in the last three minutes to win 38-31. Paul Moyer recovered a blocked punt in the end zone to tie the game, and Krieg hit Ray Butler on a 67-yard bomb for the game-winner.

Seattle also won a brutal 17-12 Kingdome blood-pisser over the eventual World Champion Giants to run their record to 5-2. Then the month of ash and doom... four losses... outscored 119-34... only four offensive touchdowns. Sure, each loss was to an eventual 10-win team, but it truly felt like Seattle might not ever win another game.

The next five games were, improbably, the greatest stretch of Seahawks football we'd see until 2005. This was the absolute peak of Dave Krieg's career: Over a 5-0 stretch he fired 11 touchdowns and one lonely interception. His QB rating? 130.96.

Seattle needed big plays to beat the sad-sack Eagles 24-20 (72 yard bomb to Darryl Turner, Eric Lane blocked punt, BJ Edmonds punt return), but four days later they ruined Turkey Day in Big D with a decisive 31-14 victory. This is still the BEST. THANKSGIVING. EVAR. The Hawks somehow topped this with a 37-0 MNF wipeout of the L.A. Raiders at the Dome the next week, which included an 11-sack beating of Jim Plunkett. On a personal note, my parents decided to dramatically reveal our new big-screen TV when I got home from school that day, just in time for the game... Just like Ice Cube, I gotta say it was a good day.

In San Diego the Hawks kept rolling behind four TD strikes and 305 yards passing from ol' Mudbone, setting up a final showdown with the eventual AFC Champion Broncos... It was instantly apparent that Denver brought a knife to a gunfight that day, as Curt Warner romped for 192 yards rushing and three TDs in a 41-16 demolition of Mr. Ed and his minions.

So why did Seattle miss the playoffs? They lost tiebreakers to the Bengals, Jets and Chiefs (all of whom the Hawks lost to during that forlorn 0-4 stretch at midseason).

On my deathbed, I will still believe that if the '86ers had just squeaked into the playoffs, they would have won Super Bowl XXI. Maybe that's why the 1986 team is so beloved by those of us who witnessed their exploits: They showed us a quick glimpse of championship-level football, and we wouldn't really see that from the Hawks again for damn near 20 years.
Posted by Ramona P. at 6:36 PM


Am I one of the only dudes to remember that crap? Thanks helping others understand our pain!!!