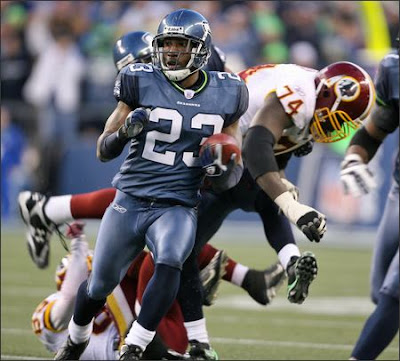 The '07s couldn't run the ball worth a damn, which was brutally evident when Shaun Alexander failed to convert a key 4th-and-1 in OT at Cleveland. After that loss, Holmgren put the team's fate squarely on the arm of Matt Hasselbeck. Beck responded with the best performance of his career, and the Hawks went much farther than a team utterly incapable of running the ball should ever should.

The defense was one of the league's best before comprehensively collapsing in the snow globe of Lambeau Field... Patrick Kerney and Marcus Trufant had career years, and both terrorized the Redskins in a Wild Card Playoff win far more dramatic than the 35-14 final score indicated. As I wrote at the time:

It’s getting to be an cliche, isn’t it? Seahawks get overlooked, disrespected, and dismissed. Seahawks host playoff game; opponents dismiss the impact of the 12th Man. The Qwest Field crowd is louder than a Boeing Dreamliner, a bunch of crazy shit happens, and in dramatic fashion the Seahawks emerge victorious (and the losers later admit the crowd noise was a factor).

I’m not hearing a peep from any of you.. I wonder why. If we lived in a just world, so-called “experts” who spout lazy psuedo-analysis like I heard all week would be banished from the journalistic profession. However, they still have jobs and are getting ready to completely dismiss the Seattle Seahawks yet again. Fucking Come-swabs. Jesus.

Yeah, I was at that Redskins playoff game... and yes, it was AWESOME.

The '07s are one of only THREE squads in team history to win 10+ regular season games and at least one playoff game (the others were '84 and '05). For that, I figuratively tip my bonnet their way.
Posted by Ramona P. at 9:12 PM

I was also at that game, one of the best experiences I've had at Qwest, which included Redskins fans getting arrested right next to us after Trufant made the game sealing pick. (they were trying to fight our whole section)

That was a fabulous game. We were obscenely LOUD. Piped in noise....we don't need no stinkin' piped in noise!!

I'll never forget coming back from the game and watching the replay on TV. Collinswart couldn't stand that the Hawks won. When the momentum shifted during the game for a bit, he sounded like a Redskin fan, willing them to come back and win it. Toolage.

Cool, mang. I remember watching that playoff game against Washington in a bar in Snohomish, believe it or not. (I was there for a friend's birthday party.)

Just out of curiosity, was the #4 ranking a typo? What happened to #5?

I don't know why #5 disappeared.. It's back up in all its glory... Just scroll down.

I remain convinced that if we had beaten the Pack we would've followed it up with a win vs. the Giants (at HOME) and would've advanced to the Superbowl. Unfortunately, we probably would've gotten trounced by the Pats, though....