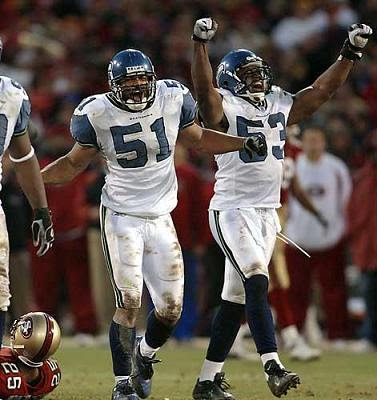 If your average NFL fan remembers anything about the 2003 Hawks, it's "We want the ball and we're going to score," followed by Al Harris and his stupid dreads streaking into the end zone to win the wild card game for Green Bay.

That's a damn shame, because the '03 Hawks were a lot more than that. They were frustrating, but exhilarating. They won (and lost) games in dramatic fashion. They were amazing at home (8-0), but only 2-6 on the road. In fact, they were riding a six-game road losing streak into the regular season finale at Candlestick Park. Seattle needed a win to keep its playoff hopes alive, and they were facing former coach Dennis Erickson (who would have loved to ruin the Seahawks season). The Hawks quickly fell behind 14-0 that day, but clawed their way back and pulled out a hard-won 24-17 victory (punctuated by an astounding pitch & catch TD from Hass to K-Rob).

I was visiting my parents in the Tri-Cities, and caught a flight back to Ohio that night after the game. We got back to Columbus just in time to see the right combination of Sunday results to put the Hawks in the postseason for only the 2nd time since 1988.

Yeah, the next game in Green Bay left me looking like this: 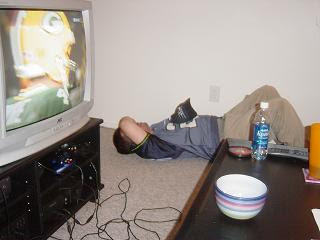 ...but I was still very proud of that 2003 team. Despite fading after a 5-1 start, they showed real heart by smashing their way into the postseason and taking the heavily favored Pack to overtime. They were the first Seahawks team win 10 regular season games in 17 years, and still stand as one of only five Seattle squads to reach that plateau. 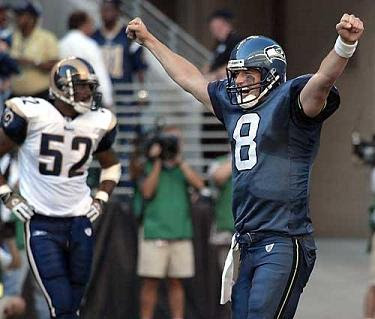 A couple of comments...First, I'd forgotten about K-Rob's catch in that 49ers game. As I recall, Alex Bannister also had a pretty nice TD grab in that game as well.

Second, how weird is it to see another Seahawk wearing #51?

I may be a bit dated, but man, that 1986 season was one for the ages...We beat Dallas at home on Turkey Day, Smoked the Faiders on MNF, and won out the last 5 games of the year...we also beat both the Donkeys and Gnats that year, both of whom were in the superbowel...but the catch, we did not make the playoffs as the hottest team going in, and we would have abso-freakin-loutely run the tables and won the whole damn thing..the following year, they Puny Pundits picked Dave Krieg and the Seahawks to go win the next SB and we pulled a seahawk and went 8-9 or 9-7, and fizzled...I may be a bit off as I don't have my media guide with me, but does this all sound remotely familiar? Ps. that other seahawk wearing #51 was just keeping it warm for the real pro-simmons was a bust!

Hass's "We want the ball and we're gonna score" was the moment that I became a Hass fan. I thought to myself "What balls on this guy....glad he's on our side."

The fact it didn't work out during that game meant little to me. I knew he'd do great things for us later. He hasn't disappointed.